The new 2022 Honda CB400X is ready for another round of improvements. Honda has recently unveiled this bike and stated that the official launch of the CB400X and CB400F should happen at Shanghai Auto Show in China. According to the latest information, the upgraded model features a new bodywork covered with red accents, camouflage patterns, and a blacked-out theme.

We also expect the same treatment to follows other models like the CMX500 Rebel cruiser, CB500F naked-sports, CB500R sports model, and CB500X dual-sport. Like the outgoing bike, its successor is still equipped with the 399cc liquid-cooled twin-cylinder engine making 45hp and 38Nm of torque.

Like the most of bikes, the upcoming 2022 Honda CB400X will be exclusive made for the Asian markets. As we said, the upcoming model will introduce some improvements thanks to the new bodywork. Unlike its predecessor, the forthcoming bike comes with more red accents, camouflage patterns, and a blacked-out theme.

It also features better full-LED headlights, an adjustable windshield, 7-spoke wheels, and excellent suspension made for all types of terrains. The bike’s ground clearance compared to its predecessor is higher by 2 inches. On top of that, the entry-level version comes with a dual exhaust system, slipper clutch, dual-channel ABS, and 5-step adjustable front brake lever. Like before, Honda should offer the same two color schemes: Matte Ballistic Black Metallic and Pearl Glare White.

In the engine department, we don’t expect any changes at all. The 2022 Honda CB400X is still powered by the same potent 399cc liquid-cooled DOHC twin-cylinder engine. Like its predecessor, this engine is equipped with PGM-Fi technology, and it delivers 45hp at 9,000rpm and 38Nm at 7,500rpm.

On top of that, it uses a six-speed automatic transmission that is smoother than before. However, at this point, there is no information if fuel economy could be improved compared to the predecessor.

The new 2022 Honda CB400X is an adventure bike that is in a way more competitive than before. This model is recognized by its attractive styling, featuring full-LED headlights, 7-spoke wheels, excellent suspension, and the same dash as the previous model. Honda recently revealed that the official launch of the CB400X and CB400F should happen at Shanghai Auto Show in China. Pricing is not yet determined, but we should expect it to be slightly higher than before. 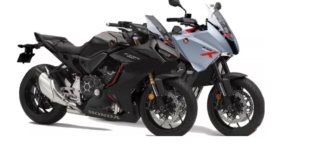